Allysian Sciences Mastermind™ is a breakthrough cognitive support† formulation made with unique, potent and proven herbal and botanical extracts from all around the world and designed to help you perform at your best. Allysian Mastermind™ was formulated by health and wellness professionals for elite performers and those striving to be the absolute best in any arena, at any stage of life.

Allysian Mastermind™ is manufactured in state-of-the-art GMP certified Canadian facilities. The hand-selected ingredients are carefully sourced and each batch is chosen and tested for its potency, stability and efficacy. potency, stability and efficacy. Extensive literature reviews were conducted to support the ingredients chosen for Mastermind, with each ingredient contributing benefits supported by clinical trials, including Cereboost® American Ginseng. Cereboost® showed, in third party, double-blind, placebo controlled studies a 15.6% improvement of working memory capacity and 9.9% improvement of working memory reaction time. 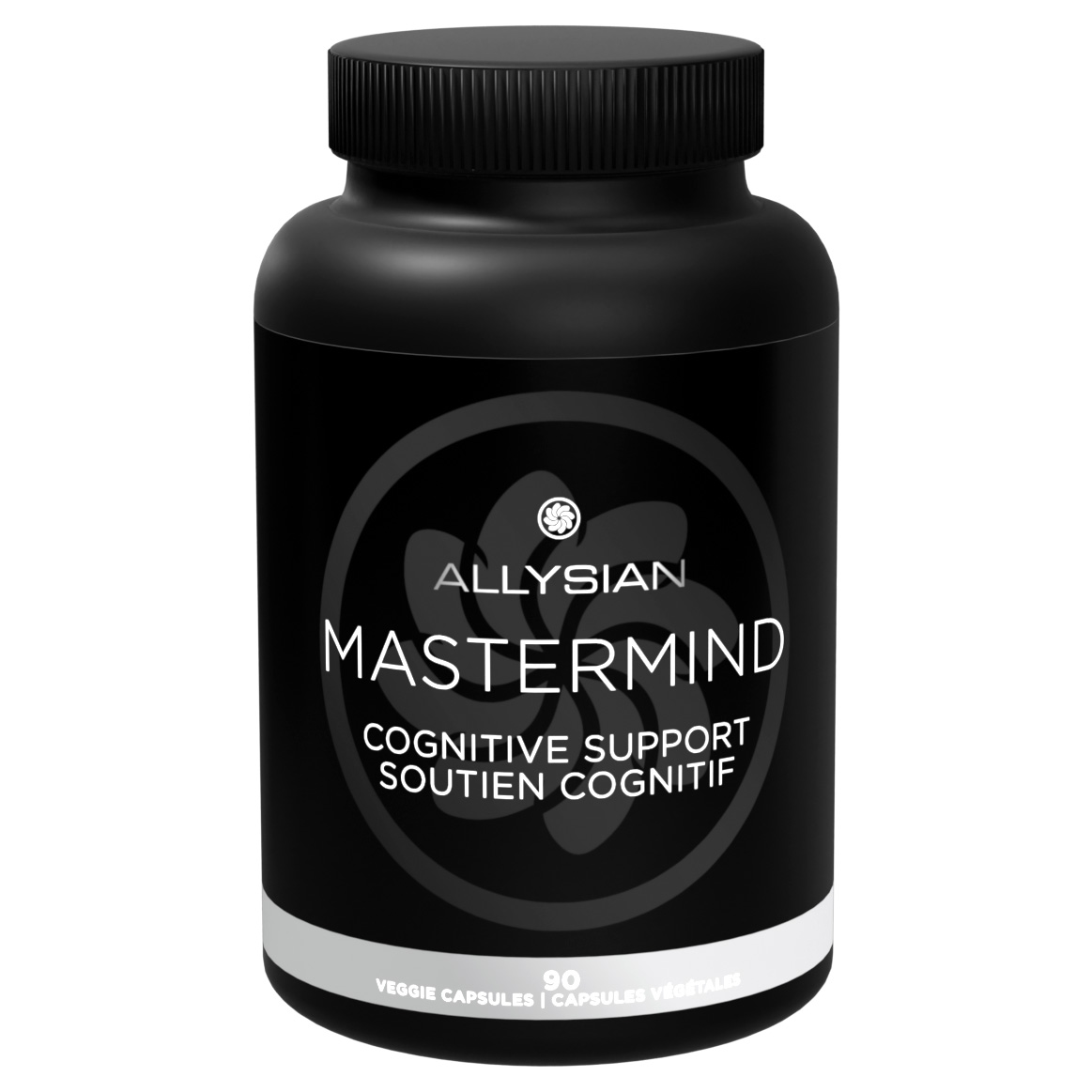 Mastermind™ is an advanced 6-in-1 blend of clinically proven ingredients with 18 licensed and approved recommended uses in Canada:

What is Nitric Oxide?

Amino acid that is converted to L-arginine in the kidneys for nitric oxide production. *5-8

Neurotransmitter studied for its role in cognitive function, specifically in improving mental health. *9-13

The Incredible Benefits of Nitric Oxide

We knew about the health benefits of nitric oxide long before scientists were aware of its presence in the human body. Nitroglycerin, a drug that works on nitric oxide pathways, was adopted as a medical therapy for angina and high blood pressure in the 1880s, but another century passed before anyone had any idea of why it worked.

The discovery of nitric oxide and its biological activities was so significant that the 1998 Nobel Prize was awarded to the three pharmacologists who identified and furthered our understanding of this incredibly important molecule affecting every area of our health. Let's take a look at the multiple roles and benefits of nitric oxide and how you can increase its production to improve numerous aspects of your health.

Allysian's proprietary formulation of ingredients studied for over 40 years and shown to have beneficial effects on cognitive function, and memory in particular, while providing adaptogenic benefits helping relieve symptoms of stress. *14-49

One of the oldest living tree species with its leaf extract used as a supplement for cognitive enhancement and to alleviate cognitive decline. It is extensively studied for its role in cognitive function and memory enhancement in subjects with Alzheimer's disease, dementia, and memory impairment.*14-27

One of the most widely known medicinal herbs, used for thousands of years and studied extensively as it has demonstrated significant and positive impacts on major cognitive domains including: *37-42

Amount in Mastermind™ is clinically validated for:

In traditional Chinese Medicine it is known to reduce stress and enhance clarity.

What is Cereboost™ American Ginseng?

Cereboost™ is a patent pending extract made from American Ginseng (Panax quinquefolius L.), chosen for its specific levels of certain beneficial compounds and clinically proven activity on brain function, including working memory and alertness *43. Cereboost™ went through an extensive gold standard randomized, double-blind, placebo-controlled crossover study that demonstrated a significant positive impact on cognitive performance in healthy individuals. The study was validated by the COMPASS(Computerised Mental Performance Assessment System) battery test, conducted at the NICM Centre for the Study of Natural Medicines and Neurocognition, Brain Sciences Institute in Melbourne, Australia.

The most important component of American Ginseng in Cereboost™ is the saponin fraction, commonly known as ginsenosides, due to its high bioactivity in the body. The total ginsenoside content in the Panax quinoquefolius root increases with age and location. The process of obtaining Cereboost™ has been meticulously studied and perfected to consistently guarantee the full integrity of the active ingredient, ginsenoside, extracted from the raw material.

Isolated ginsenosides have been studied to have the following effects: 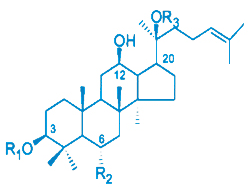 Cereboost™ has been demonstrated significant and positive impacts on major cognitive domains:

These results contribute to:

By increasing the accuracy during a choice reaction task, Cereboost™ enhances the ability to sustain focus over time.

By speeding the reaction time, Cereboost™ reduces the time it takes to retrieve an item from working memory.

By ameliorating the working memory capacity, Cereboost™ helps to extend the memory span.

Known to some as Indian Ginseng, this medicinal root has been utilized for centuries in traditional Ayurvedic medicine. As a functional adaptogen it has shown the ability to reduce stress and promote cognitive strength, energy, vigor, and immunity. It has shown to be effective for stress relief, memory, cognition, sexual performance, women's health, and weight management. *44-48

What is KSM-66® Ashwagandha?

What is KSM-66® Ashwagandha?

Winner of several awards and honours:

10 completed clinical trials with 8 ongoing studies on KSM-66® Ashwagandha proving its ability to have effects on:

† *These statements have not been evaluated by the Food and Drug Administration. This product is not intended to diagnose, treat, cure or prevent any disease.

Studies show bacopa 30:1 extract and l-theanine may improve memory and cognitive health by relieving symptoms of stress and improving mood. *50-66

Leaf extract used in Ayurvedic medicine shown to effectively and reliably improve memory in both healthy populations as well as during cognitive decline. *50-59

Extract taken from the seed of a plant found in the Amazon Basin that has shown in one study to improve cognitive performance and has shown in a laboratory study to prevent protein blockages in the brain leading to Alzheimer's disease. *67,68,69

Brain tissue compound that increases levels of brain chemicals involved with memory, and shown to improve memory and cognitive capacity in older individuals. *70-79

Tea leaves from the Camellia sinesis (Green tea) plant that is fermented to reach full oxidation and contains theophylline as a stimulant and healthy polyphenol antioxidants that help protect cells from DNA damage. *80-84

Included for its ability to increase nitric oxide production, increasing blood flow to improve cognitive function, attention, and mental performance over 8 weeks. *103-109 Proanthocyanidins act as a polyphenol, present in grape skins and red wine, that may have a role in prevention of cancer and cardiovascular diseases.

Steamed leaves from the Camellia sinesis plant known for its polyphenol content for disease prevention and ECG (epigallocatechin) for anti-oxidant and anti-viral effects and benefits. *110-113

For frequently asked questions or articles visit our Help Centre.

We guarantee satisfaction for all of our products and customer satisfaction is our top priority. If you are not 100% satisfied with your purchase from Allysian Sciences Inc. you can return your unopened item(s) in their original packaging for a full refund or exchange within 365 days of purchase. Returns must be unopened, in the state you received them, and in the original packaging.

RETURN MERCHANDISE AUTHORIZATION NUMBER: Before returning any item you must obtain an RMA number to be placed on the return package. Please contact us at support@allysian.com or call us @ 604-369-0024 and we will supply you, within one business day, with an RMA number and our return address. Returns without an RMA number or to the incorrect address will not be accepted. If you purchased an Allysian Sciences Inc. product directly from an Independent Affiliate or Distributor (it was not shipped from an Allysian Sciences Inc. location) and are not satisfied, you MUST return the product to your place of purchase.

SHIPPING FEES: The original shipping fees, if any, are non-refundable, and the cost of shipping for the return of your shipment, if any, is at your expense. However, the cost of shipping any exchange items back to you will be covered by Allysian Sciences Inc. Please ship returns only with a trackable shipping method and note the tracking number of your return. 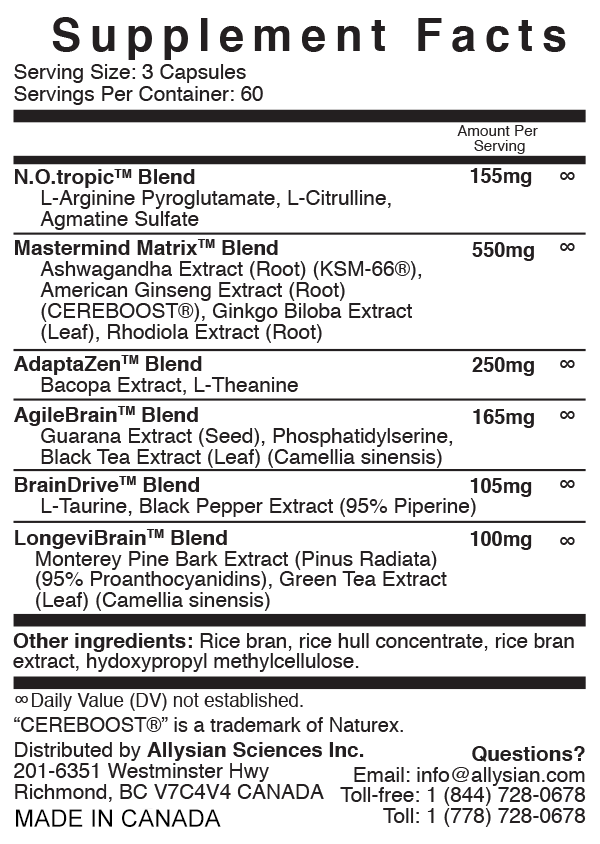